As archaeologist Phil Weigand puts it, the Huichol and their Cora neighbors had deep roots in the area where they are now settled in a sequence that had begun by the Mesoamerican Classic period (ca. 200-700 A. D.). The Corachol branch of this Uto-Aztecan language family leads linguists like Valiñas, cited by Weigand to consider the relative antiquity of this language group in the area. “This branch of Uto-Aztecan is far more closely related to the Taracahitan and Tepiman branches spoken to the north and west than to the Nahuan languages spoken farther east and south.”1 Furthermore, “In prehistoric times the Huicholes, the Coras and the Tepehuanos formed a single nation with the Opatas, the Tarahumaras and the Pimas” writes historian Salvador Gutiérrez Contreras 2, confirming the opinions of earlier historians Ignacio Dávila Garibi and Alberto Santoscoy.

From the second through the end of the sixth century A.D., the Teucaltichlán Tradition of Western Mexico is associated with the first monumental sites of the region and its circular temple structures. Its decline was not due to the migration of mythical ancestors of the Toltecs through that part of Western Mexico, according to Dr. Phil Weigand, but its decline may have been caused by the introduction of the bow and arrow from the north or metallurgy from Ecuador. Shortly thereafter, the kingdom of Chalchihuites was founded to the east of the Sierra Madre, around the archaeological site of La Quemada, in Zacatecas. The ancestors of the Cora and the Huichol were probably able to escape this dominion in the recesses of the Western Sierra Madre, although they were influenced by their civilizations, as they were by other later cultures in these regions.

The Mexican historian, J. Ignacio Dávila Garibi, wrote in “Los Aborígenes de Jalisco”, 1933 that the Huichol, the Cora and other related groups like the Tepehuan previously lived in an extensive territory called Hikuripa, agreeing with reports that the French investigator Diguet gathered 30 years earlier 3. Hikuripa, meaning the periphery of the peyote, includes today’s states of Nayarit, Jalisco, Sinaloa, Durango, Chihuahua, Coahuila, San Luis Potosí (its headquarters), Aguascalientes and Zacatecas. Their leader, called Deer-Tail, Maxakuaxí, introduced the cult to a supreme god Tewewikame (like Our Creator Sun, Taweviékame, in Huichol) that he claimed to represent, saying he had been sent from heaven to earth to instruct men and prevent them from eating each other. When the Toltecs overtook the area, Maxakuaxí united the Huichol, the Cora and the Tepehuan to find refuge in the Sierras where they still have their strongholds. This also corresponds to early versions of their verbal history that the first Spanish missionaries gathered among the Cora natives in the seventeenth century.

It is likely that the round temple structure, tuki, and their ceremonial centers reflect the patterns of the ancient culture of Teuchitlán from the Classic period. This is a thesis that has been long maintained by Dr. Weigand, and similar centers have been located along the Bolaños river canyon to the southeast of the current Huichol territory. Later cultures that dominated Western Mexico centered around today’s volcano of Tequila and the now dried-out shores of Lake Magdalena (Etzatlán, Xochitepec, among others) still sacred to many Huichol. As anthropologist Dr. Johannes Neurath comments: “The famed post-Classic site Ixtlán del Río is located in a geographical point of highly strategic value, since it was the most viable commercial route between two of the most populated zones of Mexico, its western coast and the central region.” 4

Although the Huichol have not allowed archaeological excavations to be carried out on their current communal territory, archaeologist Marie-Areti Hers is noted for having worked most extensively in the periphery of what was their land when the Spaniards conquered the area. One of her most remarkable discoveries to date was that of a prototypal stone chac-mool. This androgynous figurine seems to recline on its back with its eyes wide open to the firmament in a flexed posture5 and it appears to be from the Classic period, predating the characteristic chac-mool sculptures of the post-Classic period that were developed by Toltecs. She suggests that the round recipient on the central cavity of the traditional chac-mool might have evolved from a recipient like the gourd-bowl used by the Huichol to place offerings of blood, ground peyote and corn-gruel. She also surmises that this deity might have represented an oracular entity, which reminds us of the Wixárika’s interpretation of Our Great Grandmother Hollow Ear, who foretold the deluge.

As noted above, a major tradition that left its mark on the development of Huichol culture was that of La Quemada a monumental fortified urban center that was built between 600 and 700 A.C. to the northeast of the current Huichol territory. As Phil Weigand recorded, the Huichol recall in their chants how they were once prevented for a long time from making the sacred trip to the eastern desert in San Luis Potosí by a perverted shaman who was allied with the jaguars and lived several valleys to the east on a walled rock, surrounded by buildings. Since they stopped bringing back peyote from the east, because the jaguars ate all of it, the corn began to wilt. There was no salt, sea-shells or feathers until the Huichol leaders gathered in Teakata, the central ceremonial center, and determined to defeat the sorcerer of La Quemada.6 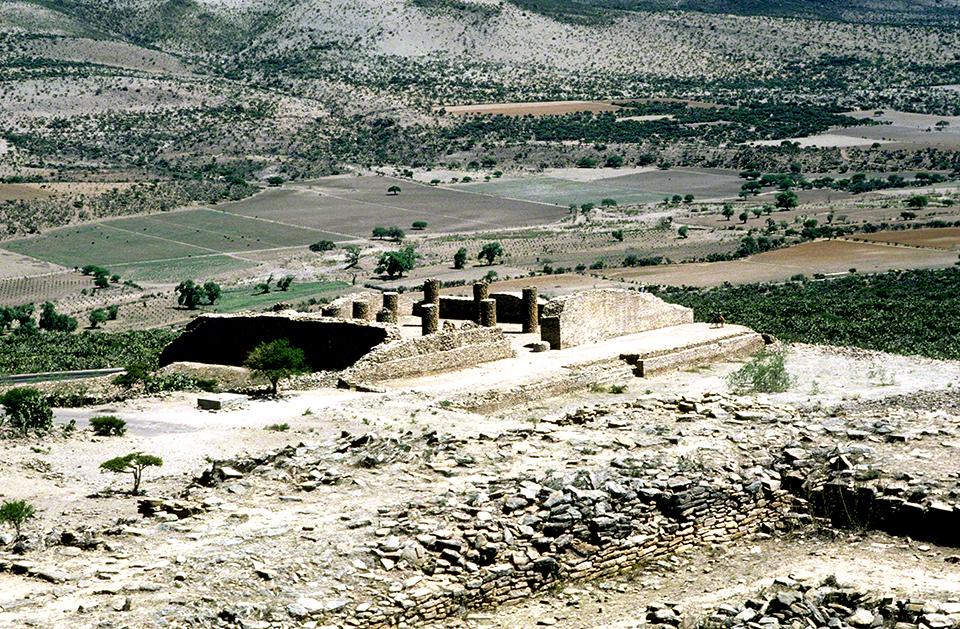 The Chichimecs immigrated around 1115, beginning to cross Western Mexico from the north. Dr. Phil Weigand (personal communication) considers there is no credible basis for believing the ancestors of the Aztecs crossed Jalisco and Nayarit to found the empire of Tenochtitlán in 1325. All investigators agree that they never subdued the people who lived in today’s states of Jalisco, Nayarit, Zacatecas and Durango.

Dr. Weigand notes that the prime forces at the time of the arrival of the Spaniards in the region were the Caxcán Indians to the east and to the north of the Huichol, who had linguistic links to the Aztecs and had taken over the area once occupied by La Quemada, or the Chalchihuites Tradition. The other major warriors at that time were the Tarascan, or Purépechan Indians from the Southwest, who were competing with the Caxcanes for a couple of centuries before the Spaniards arrived. The tribal groups in the mountains retained some freedom in their inhospitable terrain, which became the refuge of the last Caxcán leader, Guaxicar and his troops.7

The Wixaritari consider themselves descendants of a black female dog, which links them metaphorically to the Chichimecs in general, whose name means ‘dog people’. To echo Dr. Brotherston’s words, they form part of ‘Unknown Mexico’, linked to Mesoamerica’s farthest-flung former frontiers, “following a Nahuan toponymy as far as Arizona and New Mexico” “and encountering further linguistic kin of the Mexica, like the Tarahumara, Yaqui, and Pima-Papago, who are linked in turn with the Hopi, Ute (whence Utah), and Shoshoneans of the Great Basin far to the north.”8

Phil C. Weigand and Acelia García de Weigand: “Huichol Society before the Arrival of the Spanish” Journal of the Southwest, Volume 42, Number 1 Spring 2000. (The Southwest Center, University of Arizona, Tucson)

We use the x in Huichol words to indicate a sound that varies between an English sh sound, as in ‘she’ or a French j sound as in ‘je’, and a Spanish rolled r sound, as in ‘rey’.  Western Huichol use it more as an r sound, whereas in the eastern section uses the softer ‘sh’ sound. It is used in the term Mexica.

We use the ü symbol in Huichol words to indicate a sound that is close to the German equivalent or to the French u sound. It has often been recently transcribed as a + symbol.

The other sounds are English equivalents for vowels and consonants that are generically Latin. The accentuation is used according to Spanish rules.