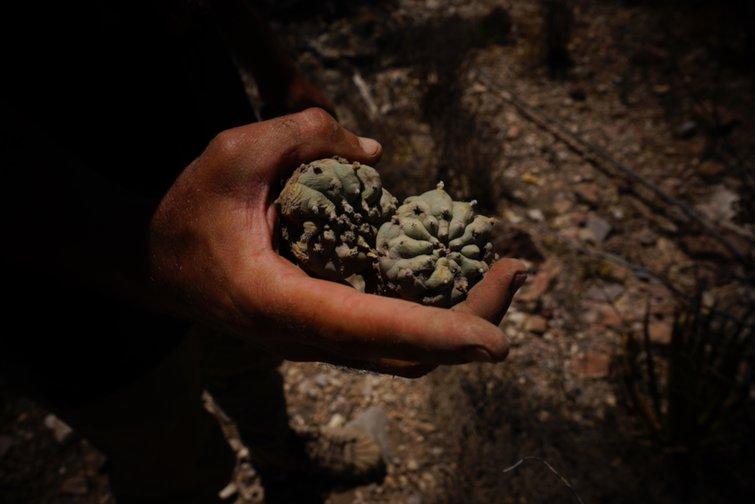 When the Spanish conquistadors arrived in Mexico half a millennium ago, they sought to convince Indigenous people that consumption of peyote, an inconspicuous cactus that contains the psychedelic drug mescaline, was akin to devil worship.

But the draconian measures imposed by the Spanish did not stop the consumption of the hallucinogenic drug, it just forced the ceremonies into more secrecy. Peyote remains central to the traditions of the Wixárika – more commonly known as the Huichol – who are native to the Sierra Madre Occidental mountain range in north-west Mexico. It is woven into their origin story and considered a way of connecting with ancestors, deities and the natural world. These sacred rites may date back thousands of years.

Today, however, scarcity looms for the thornless, button-like cactus – which occasionally produces pink flowers but otherwise sits camouflaged beneath the desert shrubs. This is due to both booming demand for peyote and deforestation caused by the expansion of the agribusiness sector in the central state of San Luis Potosí (and beyond).

This is where Wirikuta is located – part of the desert where peyote grows, and where the Wixárika believe the world was created. The Wixárika undertake regular pilgrimages to this sacred site to access the medicinal plant.

Where vast swathes of dense vegetation once grew, including peyote, there are now colossal greenhouses, giant rectangles of cultivated land and millions of chickens and pigs caged in industrial units. Experts say it is more difficult to find endemic peyote these days.

“Peyote was already threatened by overexploitation and illegal trafficking, but in the last ten years, hundreds of hectares of this unique desert ecosystem have been lost – due to the expansion of industrial agricultural greenhouses and monoculture croplands for the production of thousands of tons of tomatoes and peppers for the US market,” says agroecology consultant Gerardo Ruiz Smith, who has conducted independent research in the area.

Mescaline first became widely known in the West after the publication of Aldous Huxley’s 1954 ‘Doors of Perception’ and Hunter S. Thompson’s later ‘Fear and Loathing in Las Vegas’. “ZANG! Fiendish intensity, strange glow and vibrations,” wrote the ‘gonzo’ journalist in 1971. 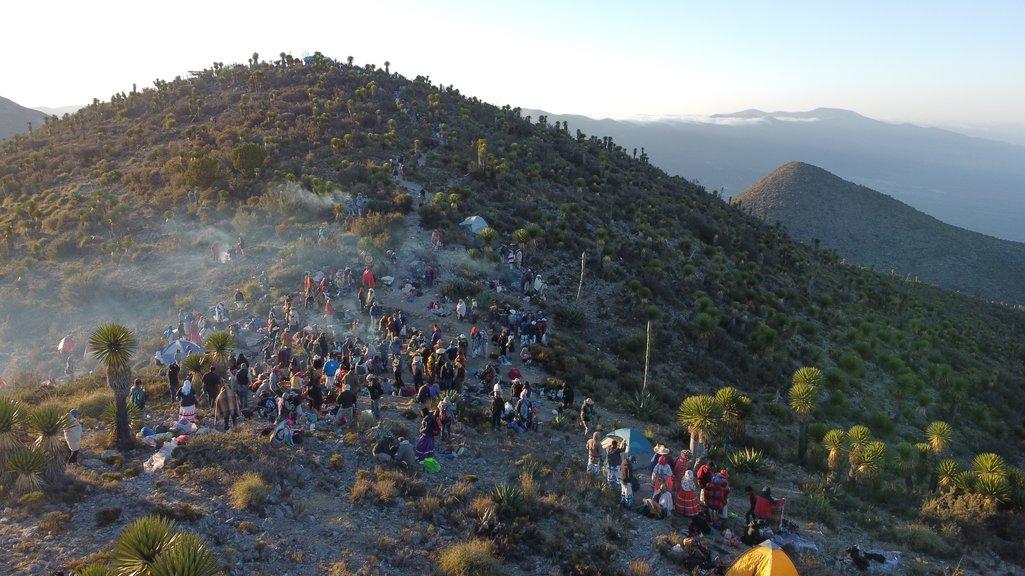 A ceremonial gathering in Wirikuta, part of an event called ‘Renovation of the World’, May 2022 ©Ivan Sawyer García. All rights reserved.

Now, as stigmas around psychedelics continue to fade amid growing evidence of their therapeutic properties, peyote has been making fresh inroads into popular culture – witness the growing popularity of Wixárika art, a recent Patti Smith album named ‘The Peyote Dance’, and the president of the World Boxing Council paying tribute to peyote consumption.

Of all the natural psychedelics (including ayahuasca, iboga and magic mushrooms), peyote – or híkuri as the Wixárika call it – appears to face the most acute ecological and cultural crises. Mega-agricultural projects that seem to have little concern for the wider ecosystem or the protection of sacred Wixárika sites are compounding the problems caused by the expanding peyote tourism industry across Mexico.

New chicken, pig and vegetable farms that span hundreds of hectares in the Altiplano-Wirikuta area – granted licences by a state whose governor’s family made part of their fortune in the poultry industry – are contributing to the serious ecological pressure. Satellite photos starkly illustrate the scale of the new operations, showing that everything has been uprooted to make way for monocropping. And big capital is already eyeing further encroachments. 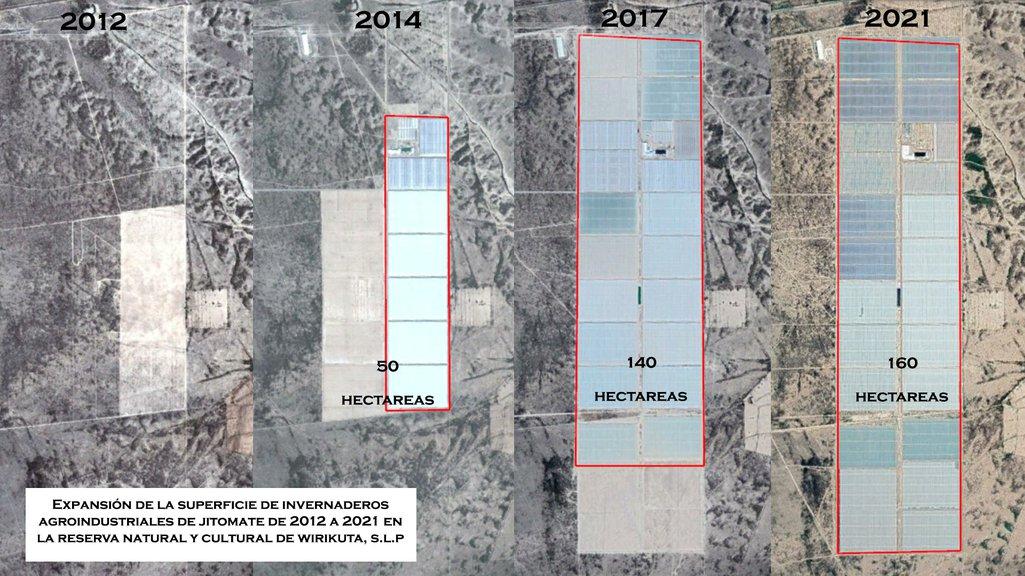 Satellite images showing the expansion of tomato greenhouses in Wirikuta between 2012 and 2021 ~ Photograph ©Gerardo Ruiz Smith. All rights reserved.

Mexican newspaper El Milenio reported last year on a protest outside pork and poultry producer Proan, which stands accused by local and religious authorities of dumping waste and contaminating the sacred territory of Wirikuta (a Proan representative promised to propose a solution within two weeks). Such meat is often destined for local markets, but peppers, tomatoes and other produce is mostly exported to the US.

Locals largely welcome the increased employment opportunities – though there have been problems. In October, the US suspended imports of tomatoes from farming company Agropecuarios Tom over the alleged use of forced labour (the company denies the allegations).

There has been a 40% decline in peyote in areas frequented by tourists and Wixárika pilgrims over the past five years, and a 100% decline in areas where agro-industry has erected greenhouses. That’s according to Pedro Nájera, an ecologist and agroecologist engineer from the Autonomous University of San Luis Potosí. Nájera belongs to Hablemos de Híkuri (Let’s Talk about Híkuri), an Indigenous initiative that is raising awareness about the threats to peyote and proposing conservation plans.

More than four million cubic metres of water per year is necessary to irrigate the tomato greenhouses already operating within the supposedly protected area of Wirikuta. Many of these facilities were built in areas where peyote grows. Drilling deep into the already overexploited aquifer to irrigate non-native plants, in an area that experiences regular severe drought, is also threatening the livelihoods of local farmers and pushing them away from their land.

To make matters more complex, much of the land in Wirikuta was previously owned communally by ejidatarios (shareholders in common land). However, in recent years the Mexican government has created laws that permit privatisation of these communal lands.

“When the land becomes privatised it removes the rights of the ejidatarios to decide the fate of their territories,” says Wixárika community member Carlos Raul Carrillo Lopez. “The land is priceless because it has forever given us life, but by privatising it the people are weakened, since it can be rented or sold.”

Looting the ‘plants of the gods’

The growing demand for peyote has resulted in indiscriminate methods of harvesting as well as poaching. Researchers recently documented a crater where there had formerly been an 125-year-old bed of peyote, indicating large-scale trafficking of powdered peyote abroad.

Cutting the crown of the plant too near the root limits its reproductive capacity, says ecologist Nájera. “It’s like castration,” he laments. Trained peyoteros cut just the crown: “When you do this, the plant grows back – sometimes with more than one head.” He adds: “Big plants are being harvested much more than the smaller ones, so the population is shrinking further." 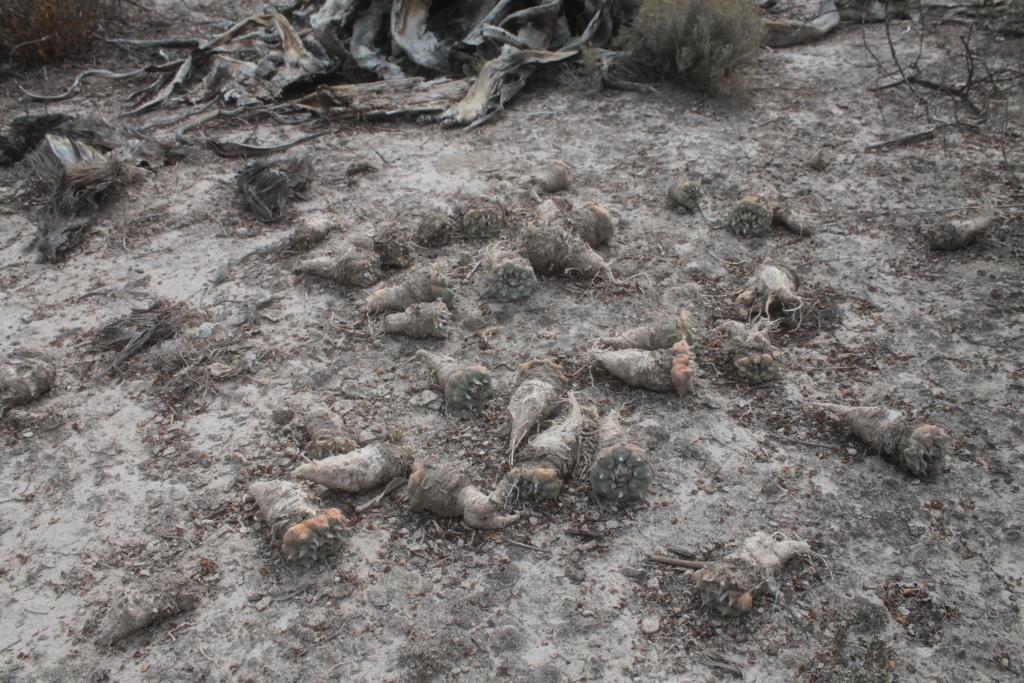 He blames untrained people who are not under the supervision of mara’akames (Wixárika shamans): “People come here and loot the plants of the Gods.” Under Mexican law, only a few Indigenous groups are permitted to harvest peyote, but the law is not routinely enforced in Wirikuta.

Nájera says that some of the land cleared for agricultural use has been abandoned due to the harsh weather conditions, but the peyote has not returned – even after decades. “It’s heartbreaking. One of the major threats to peyote is the changing use of the land. The cactus doesn’t return to these places.”

It is difficult to assess how much peyote is harvested each year (or how much grows), but the single largest purchaser is believed to be the Native American Church. It buys hundreds of thousands of peyote ‘buttons’ a year from licensed peyoteros in the US and is exempt from drug legislation because the psychoactive cactus is for religious use.

Here, the conundrum facing peyote-lovers becomes ever more acute: it is central to religious use both in and outside Mexico, but, amid conservation concerns in Texas as well as Mexico, can nature keep up with the demand in the absence of organised cultivation?

Rarely have the Wixárika community had any decision-making power despite the cultural significance of the land to their very existence, which relies on sacramental peyote consumption. They are said to number around 50,000, and many live in poverty.

Their annual, ancestral pilgrimage from nearby states to the desert has been complicated in recent decades by the establishment of roads and the erecting of fences by ranchers, as seen in the BBC documentary Peyote: Last of The Medicine Men – Huichol People of Mexico. Some ranchers object to the picking of peyote on their land, but the Wixárika claim a historic right to do so.

In May, hundreds marched 900 kilometres to Mexico City to demand the restitution of their land. “Our feet are tired, but we are more tired of waiting for justice, for our lands to be restored to us. That is truly exhausting,” said Ubaldo Valdez Castañeda.

A perfect storm of issues faces the embattled Wixárika community, the primary custodians of peyote. The first step to protect the plant, it seems, is to ask ceremony participants to collect the seeds from the peyote, so they can be replanted in the desert. “People don’t realise it takes 15 years to grow,” explains Nájera. Some are campaigning to exempt peyote from drug decriminalisation measures in the US, and to enforce the Mexican law that says only Wixárika people can harvest peyote.

If peyote is to be conserved, the status of parts of the desert as a UNESCO-recognised Natural Sacred Site must be respected. “The designation has been in place for many years, but nothing has been done to actually strengthen the protection and conservation of peyote,” says Ruiz Smith. “Wirikuta must be recognised as a protected natural area at the federal level to better guarantee its protection and conservation.”

Conservation projects are in progress. A new grassroots agroecological project coordinated by the Wixarika Research Center seeks to regenerate the wider ecosystem after overgrazing and ploughing destroyed the fauna.

Carrillo Lopez, part of the team behind the new project, emphasises the importance of developing regenerative models. “To destroy Wirikuta is to destroy the ways of life of the Wixárika peoples and the invaluable ancestral knowledge that has been passed on from generation to generation.”