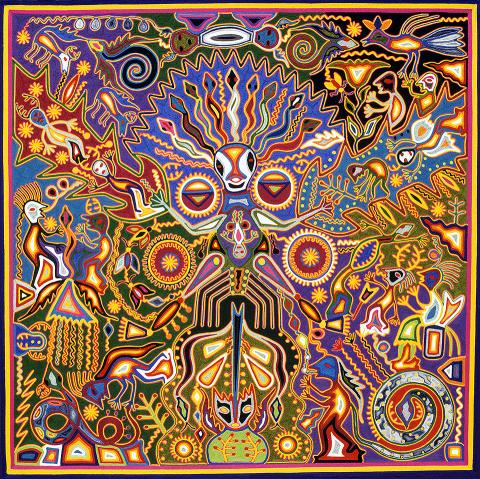 "Tatéi Ni‘ariwame, Our Mother Messenger of Rains, is held at the center of the earth (‘ixriapa) by Our Great Grandparents, Tatutsima, who were the progenitors of the world. Ni‘ariwame's arms are attached by Our Great Grandparents, while we see her left hand receive a sprig of carnations from Tuamuxawi, the first cultivator and male ancestor who escaped the flood that destroyed the previous world. Tuamuxawi is behind Takutsi Nakawé, Our Great Grandmother Hollow-Ear, who is the oracular primordial female essence of Our Mothers. The flower that Takutsi holds in her hand was injected in her womb, giving birth to Xiráunime."

Tatéi Ni‘ariwame is held by two pairs of round stone disks (tepárite) that symbolize her being restrained at the center of the world. These disks represent a resting point in the center of this plane between the Underworld and the Heavens. As Ni‘ariwame is held in place, she gives birth to Xiráunime (seen in her womb) and her hair transforms into serpents. The serpents turn into rain and mists rising into the heavens, as well as serpents turning into rivers on earth. The ocular nipples on her chest (flanking the legs of the embryo) also release their milk as rain drops in the sacred cave spots where Xiráunime was born. Her urine is released below like springs of water and riverbeds from the sacred home where she resides today. There she was transformed through giving birth to Xiráunime, whose body becomes like her skull and her urine turns into her skeletal rib cage.

On the other hand, her mother, Tatéi ‘Utianaka, the ancient Mother of the Earth, Rivers and Fish, is indicated solely by her eyes, which appear at top center (just below the picture's edge), a mouth, and two cheeks (depicted as faces). Tatéi ‘Utianaka disseminates the waters of her daughter Tatéi Ni‘ariwame, depicted here as two rain serpents that spiral out beneath Tatéi ‘Utianaka’s cheeks.

The owl-like being at the very bottom and center of the yarn painting is Tatéi Yurienaka, 'Our Mother who Survives off her own Veins' (the Earth), within whom Xiraunime appeared seminally, before he was transferred out of the Underworld beneath the core of the earth, through an arrow shaft (the male symbol of life here depicted transpiercing Tatéi Yurienaka's head), up towards the body of Tatéi Ni‘ariwame, who gave birth to him while restrained at the center of the earth. Rains emerge and flow down from the arrow's shaft, in the form of serpents, which are like underground serpents.

In the upper right quadrant of the yarn painting appears Xapawiyemetá the region of Our Mother of South Waters, where the Great Flood ended. Here Tatéi Xapawiyeme, Our Mother South Waters, appears as a bird to announce the Great Flood. Below her rises the squash vine flower, xewá, which is the fruit of the rains. Behind the squash flower appear the rain clouds as embodied by Xikiakame (Squash Boy) and Tatéi Xapawiyeme. The flame-like form above represents the ancestors who had been frozen into rocks (the skeletons of this world). Below the blue realm of the Flood itself (where Tuamuxawi and Takutsi Nakawé are wading), emerge feathers and wavy lines which depict the Flood's eventual vaporization.

Our Mother Ocean, Tatéi Haramara, is found seated in a chair within the painting's lower right quadrant. From her feet emanates the serpent of the ocean, while her sacred spot within the ocean (a large rock island called Waxiewe) is shown directly behind her seat. Her breath transforms into the shape of a serpent with legs and arms, which shows the transformation of ocean's foam, rising from here to the highest mountain peaks, where humidity is kept (here represented as another Ancestor who has transformed into a peak). Between Tatéi Haramara and her breath appears Tamatsí Wawatsari, Our Elder Brother with Large Antlers, who is the Spirit of the Tree of Wind in the Mountains. Tatutsi Maxa Kwaxí, Our Great Grandfather Deer-Tail, is connected to the Ocean serpent's tail. He holds Tatéi Ni‘ariwame in place, for he supervised the movements of the rains at the founding of the world, giving her commands for her transformations.

In the yarn painting’s lower left quadrant, the anthropomorphic figure of Our Mother White Serpent, Tatéi Kutuxame walks down Tatéi Ni‘ariwame’s beaded water course. She is transformed into the serpent that is the main river course in the Huichol Mountains, breaking the rocks beneath its canyons and rising out to the Pacific Ocean. Tatéi Kutuxame’s eventual expiration precedes her apotheosis as Tatéi Haitsi Kipiri, Our Mother Dew Soul, who rises above in the form of a serpent, releasing water from her skirt. Tatéi Haitsi Kipiri goes to the North (‘Utata) where she becomes the Mother of Northern Rains. Here she is flanked on the left by Tsakaimuka, Father of the Setting Sun, and to the right by Tamatsí Paritsika, Our Elder Brother Master of the Hunt. Attached to the margin below is Tsakaimuka in his sacred spot, while the blue area below corresponds to the nearby sacred waterhole of Tatéi Kewimuka, Our Mother of Western Rains. The zigzag figure at the bottom left hand corner symbolizes the lightning of Xiráunime. In brief, as the rains spring from her head, lightning will be discharged from her chest in the form of Xiráunime.

In the slanting red area above are the Tamatsima, those who are like Our Elder Brothers, shown plunging into the eastern waterhole named Tatéi Matinieri. They baptize themselves, assume their sacred names and transform into two deer, which appear above them in the eastern holy land of Wirikuta. Here, they receive spiritual life (yellow flowers) and hear the words of the Ancestors in the wind (line connecting water holes at upper margin).

The winged insects circling the large central left prayer bowl are Tatéi Ni‘ariwame's insect messengers that announce the coming of the rains. They are still connected here with the pulse of her ankles and her wrists so they are not being dispersed on earth yet.

General Observations: There are four sets of nierikate, in pairs simultaneously directed to the East and to the West, to the Heaven and to the Underworld, to life and death. At the bottom flanking Tatéi Yurienaka, are two small nierikate located beneath the surface of the earth. These are carved from lava stone and called tepárite (represented as a pair of circles with serrated circumferences). Memory (‘iyari) is poured into this world through the tepárite that are (represented as the higher central pair of serrated disks) attached to her neck and kept in the large gourd bowls attached to her belly. At the very top of the yarn painting, nierikate, in the form of faces appear as the cheeks of Tatéi ‘Utianaka, Our Mother of the Earth, the Rivers and Fish.

Explanation based on a tape recorded conversation with José Benítez Sánchez.
Translation and Interpretation ©Juan Negrín 1980 - 2020