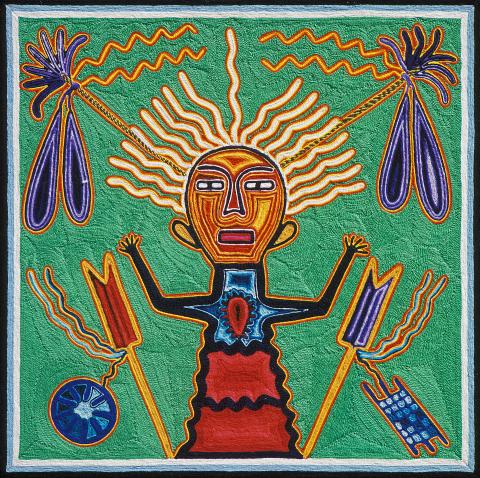 Finally all the religious objects were formed appropriately: the arrows were made with due preparation and the idol was fashioned, much in the likeness of the old Master of Fire. The ancient man's votive arrow was placed at the right of the idol (our left) with its mirror and shield, nierika. On the other side are Xurawe or Young Star’s instruments: his arrow and a prayer mat, itari. Healing plumed arrows, muwierixi, are attached to the idols head. Upon the ancient man's death, his idol was removed from the inaccessible cave where he dwelt and placed in Tatewaritá, near where Our Ancestors’s spirits rest in Teakata. Now the ancient man was named Tatewarí, the Grandfather of Fire. Indeed, he was previously called the ancient man for the hewixi did not know him or his significance. But, in time, his meaning became clear as the deer allowed themselves to be seen. Xurawe also revealed himself now with his real name: Tamatsi Paritsika, Our Elder Brother, the master of the hunt and owner of the game. At present the Wixaritari take vows to Our Grandfather Fire to the cave of Tatewaritá, where the idol is imbued with powers. There we learn his story. The idol is made of soft lava stone, teanuxa. Bits of the idol from the region of the heart are swallowed to instill inner strength. Soon after the idol was made in Tatewarí’s image, the hewixi continued the hunt for the deer, which they still needed to sacrifice to the deceased ancient master, who remained present in fire as an ancestor. Eventually, they located the game which has, since then, dispersed all over the earth. At the same time they discovered that Young Star was really the Master of the Game and that he had been misdirecting them in the hunt. Only after they had shown their ability to sacrifice themselves in their search, did the Master of the Game allow one of his animals to be killed in order to soothe Tatewarí.

Translation and interpretation by Juan Negrín
based on a tape recorded conversation with the artist.
©Juan Negrín 1974 – 2018 All rights reserved - Digital and Print.