Wixárika Caravan to AMLO: We Want Our Land Back 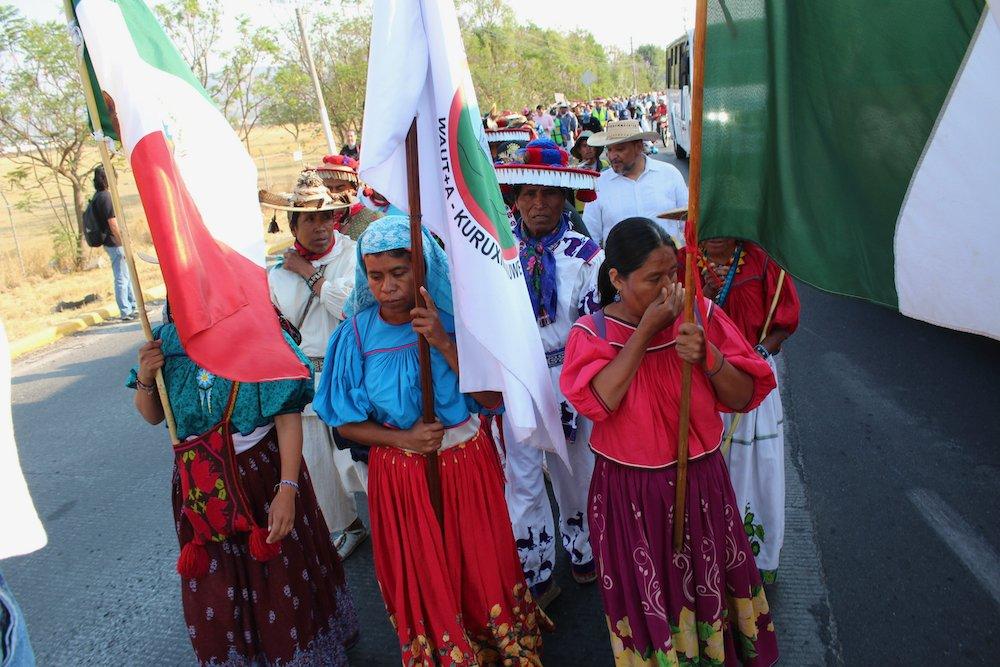 “We need to raise our voices so that our rights do not continue to be violated”: Sitlali Chino Carrillo, President of the Agrarian Commission for the communities of San Sebastián and Tuxpán de Bolaños. Like the other members of the caravan, she had walked 353 kilometers upon her arrival to Guadalajara, and she is willing to continue 700 more to the National Palace if necessary.

Mothers pushing baby carriages, grandmothers and grandfathers in their 70s and even a man in a wheelchair joined the ranks of the 200 Indigenous Wixárika people making their way nearly 1,000 kilometers along the sweltering highways of México in a generations-long battle to recover their stolen lands. The Wixárika Caravan for Dignity and Justice departed from the Western Sierra Madre on April 25 and has been walking ever since, camping alongside the highway and rising at dawn to carry on.

Their goal: to speak with none other than President Andrés Manuel López Obrador, and they will settle for no one less. With temperatures in the upper 90s, they hope he’ll meet with them along the way, but if not, they are prepared to walk all the way to the National Palace. They plan to ask him to follow through on his campaign promise in 2017 to resolve the conflict, which would return more than 11,000 hectares — the equivalent of more than 42 square miles — of ancestral lands that were taken from their community, San Sebastian Teponahuaxtlan, by neighboring ranchers more than 100 years ago, some of the most productive farmland of the region.

Wixárika schoolteacher Oscar Hernández, their leader, never envisioned himself walking across the country to demand an audience with the nation’s president. But as he bandaged his blistered feet after 11 days on the road and took a moment for rest and reflection in Guadalajara’s famous Plaza de Armas, he was firm in his resolve.

It had been five years since Miguel Vázquez Torres, the leader of this movement, had been shot down along with his younger brother Agustín by cartel members. It was never proven, but many believe the killers were hired guns, contracted to silence them. Other leaders began receiving death threats, and the movement went quiet for a while. But Hernández now holds the Common Lands Commissioner position that Torres had held, and along with his fellow community members, he decided to take up the banner again.

“Today Mother Earth, Tatei Yurienaka, is suffering from the events that are happening in the world,” he said. “Our Mother Earth demands that we reason, take precautionary measures. How are we going to deal with what is happening on the planet? There are many phenomena, and climate change is getting stronger. So this is what we as a Wixárika community have decided, with our wise Mara’akate (shamans), guiding us to do.”

Agriculture that honors the Mother Earth

Hernández says that if the land is returned to them, they will manage it in a way that is much more in tune with the needs of the environment. They plan to build a new community there based on the original agroecology system of the Americas – the milpa system, as it is called in Mexico. Instead of a chemical-based monocropping system, the milpa is a model of agrodiversity, a polyculture where over 100 edible species are commonly found, creating an entire ecosystem including edible wild plants as well as tomatoes, chiles, nopales (cactus), fungi and medicinal plants, among others.

“To begin with, we don’t grow Monsanto corn,” Hernández said. “We don’t need to buy seeds. The seed that we use in the community, it’s criollo — Colored corn, that’s what we sow.”

The seed used by the ranchers of the region is “mejorado,” hybrid seed, planted in a conventional monoculture system that requires the use of agrochemicals, explained Hernandez. But members of the Wixárika community of San Sebastian save their own native seeds of many colors and varieties. They depend on the many species included in the traditional milpa system as well, said Hernández, including the “three sisters” of corn, beans and squash, as well as the nutrient-packed wild greens known as “quelites” – amaranth, purslane, and other edible species.

Sitlali Chino Carrillo, currently one of few women leaders in the community, is president of the Agrarian Dialog Commission which has been overseeing the co

Sitlali Chino Carrillo, currently one of few women leaders in the community, is president of the Agrarian Dialog Commission which has been overseeing the community response to the conflict. “I think that for indigenous peoples, agriculture is very different,” she said. “For the ranchers, agriculture is deforesting the land, it is contaminating it. Not for us. We have a lot of respect for our Mother Earth, and we work with it sustainably.

“That is why we don’t exploit the land 100%, because for us it is sacred. But for the mestizos (non-indigenous), they exploit it to the fullest without taking into account the damage they are doing… In our case, we do it in the most sustainable way possible to somehow give the land the respect it deserves.”

The Wixárika people’s fight for restitution of their lands is emblematic of what has occurred over the past 100 years throughout the continent. The tide is beginning to turn, as San Sebastian’s case is showing, at least on the legal level.

The Wixaritari (plural for Wixárika) have inhabited San Sebastián and Tuxpan de Bolaños in the far north of Jalisco state since long before the state line that divided their territory was drawn, long before the states of Jalisco and Nayarit even existed. They were granted land titles by the Spanish crown in the early 1700s. But in the early 1900s, the Mexican government, like governments throughout the Americas, encouraged development of “abandoned” lands such as the vast extensions held in forest reserves by indigenous peoples.

Such was the case in Huajimic, a village in the neighboring state of Nayarit. In a similar pattern to what was happening elsewhere in Mexico and other Latin American countries, the government denied Wixárika ownership of their land and granted non-indigenous neighbors the titles to vast expanses of forest that were turned into ranches and handed down from generation to generation.

The people of San Sebastian have been waging this battle for generations, first in the courts and then on the land, for more than 50 years. Since they have the Spanish land titles as well as a presidential decree that dates to 1953, they were finally able to win their first claim in 2014. In all, 18 claims have been decided in favor of the Wixárika community, including one on May 11, as the caravan prepared to enter the neighboring state of Michoacán. The ranchers have won none. There are still more than 50 claims waiting in the courts to be adjudicated.

But since that time, the efforts to reclaim the land have been met with resistance and even threats of violence by the ranchers who call it theirs — and the state has remained silent. The federal government has a fund to provide restitution to landholders in conflicts such as this one, but has repeatedly declined to make it available in this case.

In 2016 when the court granted title to a 187-hectare hillside ranch, the government declined to respond to the community members when they asked for support in taking the land back. Federal government authorities said there was not enough money in the restitution fund to pay for the land; the state governor spoke out in support of the ranchers; and local law enforcement did not respond to their requests for accompaniment to the parcel so that they could meet with court officials and finalize the land restitution.

In the absence of a clear process or police support, the community decided to take possession of the land themselves — en masse.

Hernández was there when more than 1,000 community members walked three miles down a mountain from San Sebastian to the parcel, met with the court officials who signed the land over to them, and took turns occupying the ranch as two families began the process of making a settlement. He was there when the federal government finally responded by creating a “working group” so that the ranchers and indigenous leaders could work through their differences. But without compensation, the ranchers weren’t about to turn over their patrimony handed down to them over the generations.

That’s why the ranchers approached then-candidate Andrés Manuel López Obrador about the issue. Obrador, campaigning with now Gov. Miguel Angel Navarro in May of 2017, acknowledged the presidential decree and court cases validating indigenous ownership of the land, and he promised that, if elected, he would resolve this issue and make sure the ranchers receive just compensation.

The community’s attorney, Carlos González García, has been in touch with the office of the president, but until now has not received any indication whether he is willing to meet with the marchers.

“I hope they have the sensitivity to attend to the caravan before it reaches Mexico City because the road is hard, it is complicated, more so in the current weather conditions,” said Gonzalez. “However, the community is determined to advance to Mexico City if necessary.”

“They are the ones that are preserving life on this planet,” he said. “(Indigenous land) is where most of the forests, jungles and biodiversity are found. And the specific case of the Wixárika people is significant because it is an original people that preserves, like few others in Mexico and in the world, its organization, its culture, its religion and its entire way of life.

“Their entire way of life is totally tied to the Earth. So, to the extent that the lands from which the Wixárika people have been dispossessed are restored, their culture as a whole is preserved, and that implies for all of humanity the preservation of relationships and ways of organizing ourselves socially to care for, protect and preserve nature.”

“Their entire way of life is totally tied to the Earth. So, to the extent that the lands from which the Wixárika people have been dispossessed are restored, their culture as a whole is preserved, and that implies for all of humanity the preservation of relationships and ways of organizing ourselves socially to care for, protect and preserve nature.”

Tracy L. Barnett is an award-winning journalist whose work has appeared in the Washington Post, Yes! Magazine, Reuters, Earth Island Journal and USA Today, among others. She is the founding editor of the Esperanza Project.