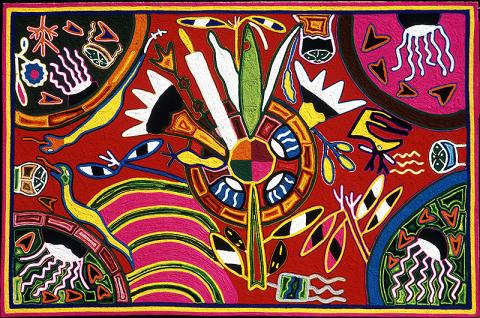 Our Elder Brother Blue Deer, Tamatsí Maxayuawi, the hummingbird, tipina, and Our Mother Young Eagle Girl, Tateí Werika Wimari, entered the land of Wirikuta. The maize, the arrow and the bowl have been blessed with the blood of the deer and Our Elder Brother has taken them to their corresponding spots. Thus the corn was made more fertile, the arrow was turned into a conveyor of messages and the gourd bowl became a recipient of visions and a vessel of prayers directed to Our Mothers of Rain in particular. The rattlesnake that guards the Sacred Land to this day then appeared. This is how Wirikuta reached completion, for it was filled with the spirit of the Blue Deer.

The pink and green arks at lower left center symbolize the exultation. Now, the power of Wirikuta radiates to the four corners of the world (each with its sacred waterholes) and the deer leaps from corner to corner, leaving hoof marks from which peyote, the flesh of the deer's spirit, grows.

The sacred face of Wirikuta, or its nierika, is the central disk (divided into four colors), where three blue and white hills represent the seats of Our Ancestors. Both the sacred face of Wirikuta and the seats of Our Ancestors are designed within the prayer bowl (whose rim is orange). The arrow, the candle, the corn stained with blood and two flowers with large petals, which are the sustenance of the Blue Deer, project out from this center over the perimeter of the bowl.

Explanation and Translation by Juan Negrín based on a tape recorded conversation with Juan Ríos Martínez..